How do I restore configuration backups?

It's possible (and recommended) to back up the configuration for your Nagios component using the Configuration-> Control-> Commit screen. But where do you go to restore these backups? What do you need to do to ensure a backup that is made in an older version will work when you restore it to a newly upgraded version?

The restore process is not currently available within the UI. The bookshelf (help screens) cover this in the section called "Home > SYSTEM MAINTENANCE > Backup and Restore", but this section is long and general. The following procedure is a simplified version:

To restore a backup made with the same version of GroundWork: 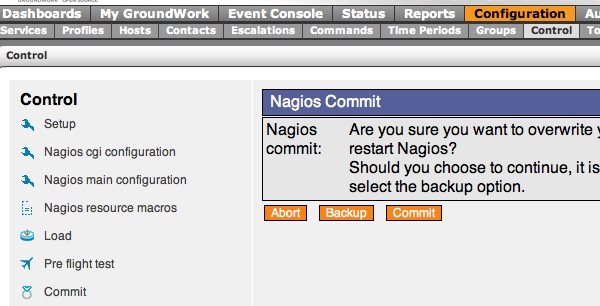 Ok, so what if I want to restore a backup I made with an older version of GroundWork?

GroundWork versions often contain changes to the data schema for the configuration database. This means that the backups you made on older versions can't be used on the later versions unless you migrate them.

Fortunately, the migration is easy. Follow the procedure above, until you have the backup restore, but have not re-Committed the changes. At the command line, type:

You will see the follwoing messages on the screen: