This document contains important information about the GroundWork Monitor Enterprise 7.1.0 Release. Please read the relevant sections of this document before proceeding with installation or upgrades.

GroundWork Monitor 7.1.0 is a major feature release that includes a large number of bugfixes and several significant usability and performance improvements. It is recommended to upgrade to GWME 7.1.0 release to take advantage of these improvements that are described in more details in the following section.

The UI screens and configuration pages have a new crisp look & feel. The internal threading model has been improved to achive better scaling and more robustness in the connection management.

Configuration changes by Cloud Hub, Downtime Scheduling and BSM are written to an audit log that can be viewed by an Audit View application. Monarch commits and backup messages are as well logged in the audit log. As features are re-worked and updated more significant data will be sent to the audit log.

Host naming conventions are seldom consistent across IT operations teams and therefore the same host object might be named differently by the different groups. In GWME 7.1.0 GroundWOrk introduced the concept of Host Name aliasing were different hosts objects can be combined to a unique Host Identity. All service checks of the objects will be visible (with the Application Type prefix) under the unique host identity.

System Administrator would like to exclude certain Hosts when fully automated monitoring through Cloud Hub is used. The Blacklist feature allows to define a list of host names to be ignored when monitored by Cloud Hub.

Encryption of passwords in config files

Passwords for the REST API access, proxy users and LDAP admin credentials stored in text files on the file system are now fully encrypted. The passwords are managed through a new password management screen on the license page. 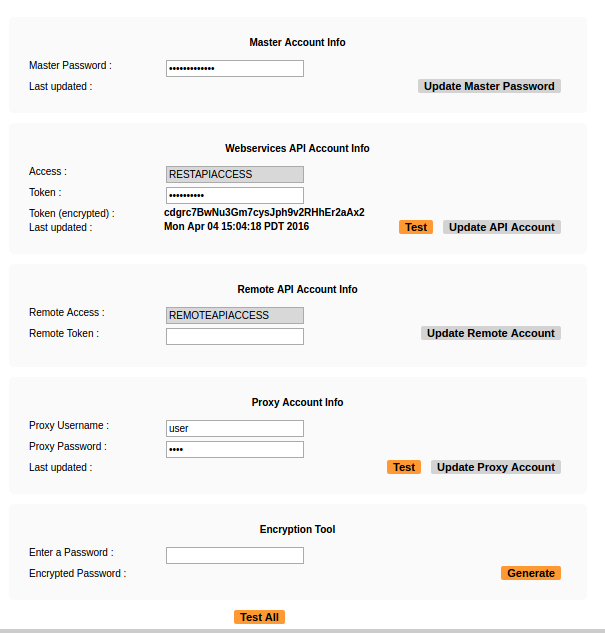 Token based Authentication for REST API

REST API access validation now uses a generated token instead of a valid user account. This separates the API access maintenance from the user management maintenance. Each access control can run on a separate update schedule.

The LDAP integration has been completely updated in order to remove constraints on naming of LDAP/AD groups.

Groups to membership (roles) mappings are no longer hard-coded and are definable in the ldap mappings file.

Port yo PostgreSQL backend for notifications has been contributed back to the NoMa team.

The current release improves the Event Management workflow and make sure that all functionality is consistent across all data types. The consistency across all monitoring data sources (Virtual environments, Devices monitored by Cacti, servers monitored by Nagios, syslog and trap feeds) is becoming more important in today's compute services. The Event Console changes for GWME 7.0.2 were focused on seamlessly integrating all type of event data. The changes can be summarized as following:

Quick overview of the new elements: 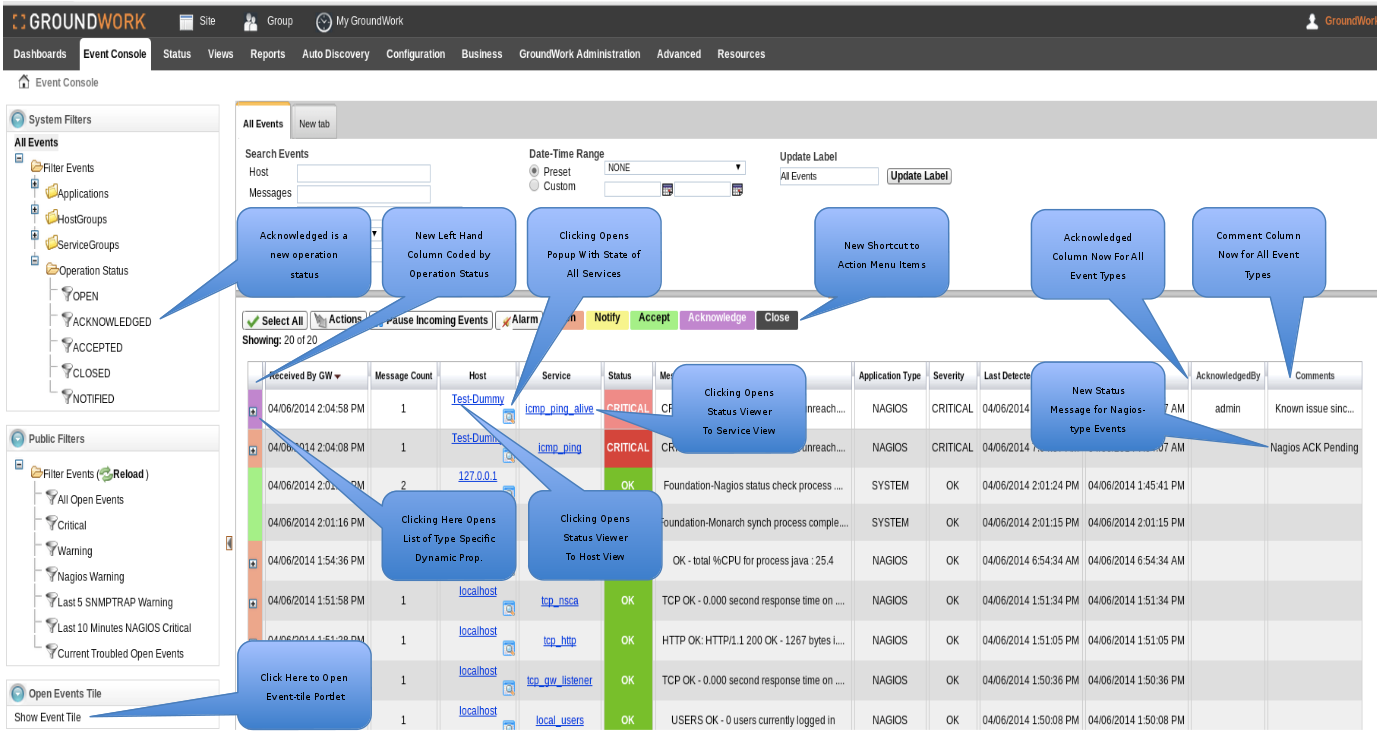 Starting with GWME 7.x the REST API was introduced that gives secure access to GroundWork objects including:

The REST API documentation is available in GroundWork's bookshelf.

To enable developers for rapid development the rest api client libraries are available on the public Nexus repository. Java developers can add the reference to the POM to have all dependencies included in a project.
More details on how to integrate the REST Clients can be found in the developer section of the bookshelf.

The legacy Nagios feeders (status & event) and the newly introduced Cacti feeder have been re-factored to use the REST API to submit data into the GroundWork system. Using the more the more scale-able REST API and replacing the legacy XML feeders resulted in a more robust and better performing data feed into the GroundWork system. The system planning guide has been revised to reflect the improvements.

The current version of GroundWork Monitor went through a security and penetration assessment by Verizon Security services and received a rating that was above the Technology industry average. Details of the reports can be made available to existing customers upon request.

GroundWork Monitor 7.0.2 includes a Cacti feeder which is enabled by default. With this feeder and devices monitored by Cacti and having a threshold defined will automatically added to the GroundWork Foundation and therefore immediately visible in Status Viewer and event console. The step of importing cacti hosts to Monarch is no longer necessary and this step has been automated.

GroundWork Monitor 7.0.0 incorporates a completely new Enterprise Portal Platform that is highly scalable with powerful performance. Jboss Portal Platform 6 is based on the latest JBoss Application server that was re-designed to be highly modular and cloud-ready. Portal management actions such as creating and maintaining users, roles, pages, and layouts are part of the JBoss enterprise framework that significantly improves usability.

Creating Dashboard pages or MyGroundWork views has been simplified. With a few clicks and drag & drop, pages can be created and administered.

All GroundWork applications were integrated into the portal, taking advantage of the new Navigation (drop down menus), and the improved security scheme. The GroundWork applications were re-skinned to improve the look-and-feel. Also note that administrative privileges are now split between the admin user used in previous releases, and a new root user which can perform certain tasks that the admin user cannot.

This release provides enhanced monitoring for VMware vSphere, VMware ESXi, and Red Hat Enterprise Virtualization. Hypervisors and Hypervisor Management data will be seamlessly integrated into the GroundWork UI.  In addition Cloud Hub configuration now allows selection of additional views such as Storage or Network Domains and Resource Pools. The views are visible in Event Console and Status Viewer More information ...

A new log-message archiving facility is supported. This allows long-term operational data to be moved aside for reporting purposes, keeping the active-monitoring database far smaller and more sprightly.

An Archive Server is intended to take over the duty of storing long-term performance and event data. On a regular basis, typically shortly after midnight each day, recent data will be extracted from a GroundWork Monitor runtime database, transferred to a separate machine if necessary, and injected into a separate archive database.

For more information, see the Archive Database subsection below.

The visual appearance of the Configuration and Auto-Discovery applications has been overhauled to make them much cleaner.

Management of the Nagios Main Configuration options has been overhauled. They are now logically categorized and ordered within those categories; the categories themselves are grouped into a fairly natural progression of concerns; and the navigational links to reach the options are extended to show the category names, making it much easier to find what you're looking for.

For more information, see the Configuration (Monarch) subsection below.

The BSM application provides GroundWork customers the capability to represent the condition of Business Groups, Processes, and Applications according to the combined states of individually monitored hosts and services. The method allows the free combining of hosts and/or services and/or groups as components of named groups. The combinations can be assigned numerical values to weight or qualify the member items. In this way we can produce a hierarchical representation of the state of Business Services independently of the methods used to monitor components. Notifications and State changes of BSM groups are integrated into the GroundWork system using the Notification (NoMA) engine and the Event Console for further processing. Creating BSM entities and enabling them does not require Configuration changes and subsequent commits.

With the release of GroundWork Monitor 7.0.0, many components have been upgraded to the latest available versions. The following list shows the new version of the key components that have been updated with GWME 7.0.0 release:

A new log-message archiving facility is supported. This allows long-term operational data to be moved aside for reporting purposes, keeping the active-monitoring database far smaller and more sprightly.

An Archive Server is intended to take over the duty of storing long-term performance and event data. On a regular basis, typically shortly after midnight each day, recent data will be extracted from a GroundWork Monitor runtime database, transferred to a separate machine if necessary, and injected into a separate archive database. Subsequently, long-term reports can be run against the archive database instead of the runtime database. This has two beneficial effects:

Old data is not removed from the runtime database immediately upon being archived; some amount of overlap is allowed, and managed automatically. This provides for such things as ticketing-system references to event messages to remain valid for some time after those messages have been initially copied to the archive database.

In the 7.0.1 release, by popular demand, when log archiving is enabled, the standard retention period for data in the runtime database has been extended to 3 months before deletion. The data should have long since been migrated to the archive database, but it is now kept around long enough for any practical medium-term operational usage instead of being deleted after a week. Sites can locally adjust this period, using the operationally_useful_days_for_messages and operationally_useful_days_for_performance_data parameters in the /usr/local/groundwork/config/log-archive-send.conf config file.

Standard reports which access the Archive Database for long-term reporting are not yet provided in the GWMEE 7.0.1 release. They will be provided at a later date, most likely as a Technical Bulletin patch.

The GDMA 2.3.1 release contained these improvements:

The included version of the Java SDK has been upgraded to the latest version, which is 1.7.0_45. Java 7 includes many improvements, not only for performance but as well for security.

OTHER MAJOR CHANGES IN PRIOR RELEASES

The reports which are available under Reports > Alerts, Reports > Notifications, and Reports > Outages have been updated.

Using PostgreSQL as the embedded database

Up to release 6.5, GroundWork Monitor included MySQL as the default database. Starting with release 6.6, PostgreSQL, a more-robust and more-scaleable database for Linux 64-bit systems, is now used. With this new database we have seen performance improvements and a lower load on large systems. PostgreSQL comes with tools and utilities for backup, administration, and libraries for many programming languages. The commands and the SQL language supported by PostgreSQL are similar to MySQL (though with differences), and this reduces the learning curve for becoming familiar with PostgreSQL databases.

Starting in GWMEE 6.6.1, GroundWork Monitor Enterprise now supports a separate database install. The same installer is used to set up the database server. The installer also supports upgrades from GWMEE 6.3, 6.4, and 6.5 to an installation with a separated database.

Using a remote database offloads a lot of disk activity away from the GroundWork Monitor server, which reduces the overall system load and improves the system performance in general.

Starting with release 6.6.1, GroundWork Monitor Enterprise is available for 64-bit Linux. Support for 32-bit Linux has been dropped, as previously announced.

This section summarizes the minor issues fixed since release 7.0.0. GDMA issues are not included in this list.

Cloud Hub -- Upgrading from GWME 7.0.2 SP03 to GWME 7.1.0 the threshold are reset to the default profile values. Any customization to the Monitoring Profile need to be re-applied

As of the previous release, GroundWork supports only 64-bit versions of GroundWork Monitor Enterprise.

This version of GroundWork has been tested with latest versions of Firefox, Google Chrome and as well as Internet Explorer 10 & 11

ABOUT THE NETWORK SERVICE

Starting with GroundWork Monitor 7.1.0 the Network service is no longer installed and required.