WAS THIS PAGE HELPFUL? Leave Feedback

The Host Identity feature allows an administrator to associate 2 or more host names as a set represented by one name, so that reporting for all the names in the set is presented and aggregated under that one name. This makes it possible to monitor one host object using more than one method, for example Cloud Hub for the VMware view and Cacti for the SNMP view, with the host named according to VMware policy under Cloud Hub on one hand, and named under Cacti/SNMP rules on the other hand. Without the Host Identity aliasing feature these two nomenclatures would produce 2 separate host objects, licensed as 2 devices, and presented in separate context.

Having the aliasing feature, the set can be designated, with the two names being connected by a host identity or unique string that tells GroundWork they are one Host object. The order in which the names are added to the alias record defines which name is to be displayed (the first) in Status, Event Console, Views, Dashboards, Alerts, etc.

A perfect example is the case of a NetApp monitoring a NetApp Disc resource, which is also discovered by VMware and presented initially as a differently named host. Once both facilities are reporting, an Administrator adds the two names to the alias list, whereupon a host identity is assigned and thereafter the separate reporting of the services (and host states) is aggregated under the name assigned first to the alias set.

Status of the host is tracked as reported by the owner of the first name in the list. The owner in our example is Cloud Hub VMware Connector or the Smart Cacti Feeder (each has its own agent identity). In the host detail panel of Status, the additional host names and the status reported by each respective owner is listed.

Typically the aliasing data is entered after the monitoring agents discover and insert the names of the hosts. It is possible to pre-load this alias list so long as the names are accurately entered.

This feature is NOT to be used in case the host names are identical in spelling but varying in case, for example GDMA host HOSTA and the same host seen by VMware as Hosta. A different policy and set of rules governs that case; attempting to use the aliasing feature to deal with it will create an error in processing.

Host Identity entries take effect immediately, when they are made and when entries are deleted.

Here we can see as a simple example the above defined host identity used in the Status viewer. The host 172.28.113.68 is also the same device as the host LinuxSanFrancisco as shown in the bubble up Alias name and within the host summary. Also, the host LinuxSanFrancisco is not displayed within the tree navigation since it is an added alias of the host 172.28.113.68 in the host identity table. These devices are consolidated into the same node within the Status viewer. 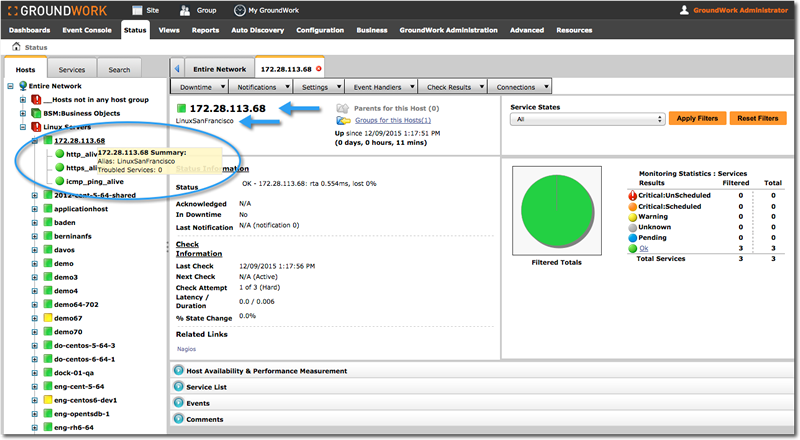 To remove a host identity simply check the box next to the host name and select the trash icon. This cannot be undone. The defined host will go back to their separate individual identities within the monitoring system.